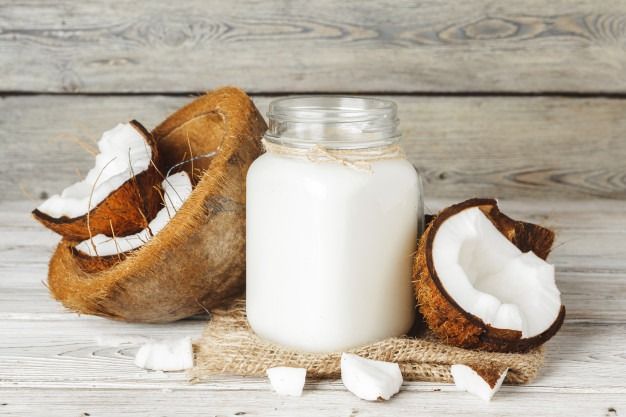 Where does Coconut Milk come from

Coconut milk is a byproduct obtained by straining the white kernel of coconut fruits, which grow on coconut trees. It is an organic drink as coconut trees are usually grown without adding extra inorganic fertilizers.

Coconut milk has a rich nutritional value and a tropical flavor. There are three varieties based on consistency and texture.

Thick coconut milk is the first and fresh extract that contains a high amount of fat molecules. It is an ingredient in the preparation of multilayered desserts and curries.

Thin coconut milk contains a lesser amount of lipids than thick coconut milk. It is a part of soups and thin sauces due to its less fat content.

As the name suggests, skimmed coconut milk has the least fat content. Containing less than 20% fat, it is part of a weight-loss diet. The canned coconut milk available at supermarkets is a mixture of thick and thin coconut milk with added preservatives.

Coconut milk is a high-calorie food as it contains high levels of saturated fat. About 60- 93% of the calories are from saturated fats known as medium-chain triglycerides.  It is also rich in protein, carbs, and fiber and has traces of folate, potassium, Vitamin C, iron, magnesium, manganese, copper, and selenium.

Is Coconut a Component of Milk Dairy

Dairy products are derivatives of the milk of mammals. Since coconut milk is a plant extraction and not a mammalian product, it is not a dairy product. Coconut milk is free of lactose, a carbohydrate that is a higher component of dairy milk. Hence, it can be consumed by people suffering from lactose intolerance, a condition in which the human body is incapable of digesting lactose molecules due to the absence of enzyme lactase. It can also be consumed by people who are allergic to cow’s milk or other mammalian milk.

Coconut milk is purely vegan. It is extracted from the white flesh of coconuts, which grow on top of a tropical palm tree. It is a perfect alternative to mammalian milk and is a prime ingredient in vegetarian food. It is also a good base for puddings, smoothies, desserts, and cakes.

The following are the benefits of coconut milk:

Researchers say that Medium-Chain Triglycerides (MCTs) help in weight loss. After digestion, these saturated fats are directly transferred to the liver for energy production and are less likely to be deposited. These triglycerides help in reducing appetite and controlling calorie intake. The low amount of MCTs in coconut milk does not bring much change in weight but prevents weight gain. Consumption of skimmed coconut milk shows better results in weight loss.

Coconut milk contains lauric acid, a lipid that improves the immune system. Lauric acid is converted to a beneficial compound called monolaurin, which has antibacterial, antifungal, and antiviral properties. It prevents bacterial diseases and infections. Studies show that it deteriorates the growth of Streptococcus pneumonia and Staphylococcus aureus. It also helps to inhibit the growth of cancer cells by inducing cell death.

4. Promotes the Health of Prostate Glands

Coconut milk contains innumerable packets of vitamins and minerals. It has sufficient amounts of zinc which are necessary for the normal functioning of prostate glands. Consumption of coconut milk once a week reduces the risk of prostate cancer, as zinc is replenished at the right intervals.

Ulcers have become common among men due to improper diet and unhealthy practices. The anti-inflammatory properties of lauric acid in coconut milk prevent and heal ulcer wounds. Consuming coconut milk once or twice a week gives speedy recovery.

Coconut oil has been a supreme ingredient in ayurvedic recipes. Coconut milk has also proved to be nourishing for the hair and skin. The fat content in coconut milk retains moisture and conditions the hair naturally. It avoids itchiness and dry scalp. The antifungal properties of lauric acid prevent dandruff.

Coconut milk promotes collagen production that prevents premature aging by enhancing the elasticity of the skin. It also heals sunburns and acne and acts as a good moisturizer.

Side Effects of Coconut Milk

“Every cloud has a silver lining!”

Too much consumption of coconut milk results in weight gain due to high levels of calories and fat. Higher consumption of coconut milk regularly affects the bowel system. It causes issues in the digestive system due to the presence of fermentable carbohydrates. A person allergic to coconut should avoid consuming coconut milk as it causes vomiting, diarrhea, anaphylaxis, abdominal pain, and skin irritation. Some people are allergic to tree nuts. Though coconut belongs to the category of fruits, the rich protein content in it causes protein allergy. Canned coconut milk has even more side effects due to the presence of sweeteners, Bisphenol-A, and guar gums. These additives harm your health.

How to Extract Coconut Milk at Home

The thick and creamy texture of coconut milk imparts extra flavor to any homemade recipe. You don’t have to worry about the cost of buying canned and refrigerated coconut milk from the market. The canned coconut milk at the market is a blend of additives and preservatives that aren’t healthy. It is an easy recipe, and you can enjoy the benefits of coconut milk at your sweet home. It’s just a matter of minutes.

1. Take a fresh and mature coconut and grate the white flesh after collecting the coconut water in a glass.

2. Put the grated coconut into a blender jar, add 1 cup of water and grind it for a couple of minutes.

3. Pour the ground content onto a muslin cloth and squeeze out the milk into a bowl.

4. Press the coconut shreds with a spoon or your hand to drain all the milk into the bowl. The collected extract is the Thick Coconut Milk.

5. Put the coconut shreds back to the blender again and repeat steps 2 and 3. The collected extract is the Thin Coconut Milk.

Isn’t that easy? Go try something new today for a change!!