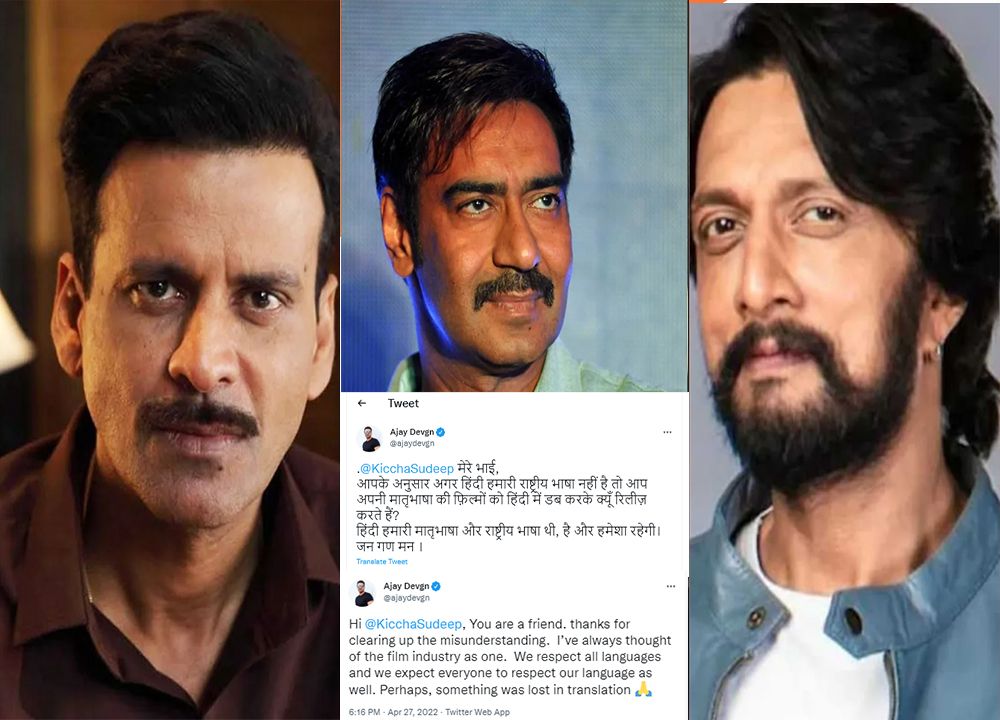 The debate between South Indian languages and Hindi is something that has been making headlines in the entertainment industry. The Twitter spat between Ajay Devgn, and Kiccha Sudeep went viral, and a lot of celebrities gave their opinions on the same. The debate has raged on whether Hindi is a national language of India or not. This started when Ajay Devgn pointed the finger at Kannada superstar Kiccha Sudeep with a scathing remark after claiming that "Hindi is no more a national language." Ajay Devgn's post stated that 'Hindi was, is and always will be our mother tongue and national language .'However, people did not keep quiet and taught him that Hindi is not India's national language but rather an official language. Now, Manoj Bajpayee's reaction to the Twitter war is also making headlines.

Now, Manoj Bajpayee opened up about the South Indian languages vs. Hindi language debate in an interview with India today. Manoj Bajpayee, a very famous Bollywood actor, thinks that this whole debate about India's national language is meaningless and futile. According to him, India has many languages, the most common of which is Hindi, but that does not make it the country's national language. He said, "One thing I do know is that this country has too many official languages. The answer is yes. The largest number of people speak Hindi, but that doesn't tell us anything. We have to learn about the way of life in each language we speak. My native language is Bhojpuri, not Hindi, and that is the dialect I feel most comfortable speaking in. All of the chaos over the language issue is pointless." Manoj Bajpayee had also commented on this matter earlier, and he said that just because we can't criticize ourselves, we end up calling them different.

The continuing Twitter feud between the two celebs has sparked a social media debate and split Twitter in two. Manoj Bajpayee's reaction to the Twitter war made headlines but other celebs are also not behind. While some people applaud Ajay Devgn for his tweet, others criticize him for referring to Hindi as a national language. Many celebs came in support of south Indian actors and expressed their views.

A famous Actor and activist, Chetan Ahimsa, also criticized Ajay Devgn for his statements and tweeted, "Mr. Pan Masala Ajay Devgn, it is better for you to be quiet rather than talking. Look at your arrogance and ignorance. Hindi was never our national language, and it will not be a national language. Your words remind us that stars are empty vessels."

In the same way, a south Indian actor, Neenasam, lashed out at Ajay Devgn and said that Hindi movies have been making money from South India for so long. Now, when Kannada movies have started earning from North India, Ajay Devgn should give them respect just like they did. He religiously supported Kiccha Sudeep on the matter and said that Hindi is not our National Language.

Ram Gopal Varma, a famous filmmaker, is very active on Twitter and, therefore, participated in the matter once again. According to him, the north Indian Bollywood stars are basically insecure of the south Indian actors. He says that they are not able to digest the success of big south Indian films like RRR and KGF2.

Sonu Sood, who is a big celebrity in both industries, also gave his opinion. According to him, we cannot call Hindi a national Language. He says, "India has one language, which is entertainment. It does not matter which industry you belong to. If you entertain people, they will love you, honor you and accept you."

However, Actress Kangana Ranaut supported Ajay Devgn in the matter. She calls him right and feels that Hindi is the national language of India according to the constitution.

It is not the first time that a debate over languages has happened in India. Manoj Bajpayee's reaction to the Twitter war got a lot of appreciation from the people. It is necessary to embrace Unity in Diversity because that is the beauty of India. India has many official languages, and Hindi is definitely one of them. However, this does not make it a national language. It is of the same importance as any other official language in India. It is, therefore, essential that we respect each language in the same way as we respect our own.